So, more things were going to happen this week, but then they didn’t because of strikes.  In both cases I support the strikes (London Underground and university staff) but I have less to write about than I planned.  I did, however, go to an enlightening talk on imposter syndome and do/read a couple of interesting things, so I’ll blog about those.

Ever since I first heard the name for them, I’ve recognised myself as having imposter feelings - as distinct from imposter syndrome, where the fear of being exposed as a fraud influences your behaviour.  The most obvious example of this is my having received AHRC funding for my PhD.  Everyone talks about how prestigious it is, and rather than agreeing that yes, I must have done an extremely good application, I always think that there can’t have been much competition and they had to give the money to someone or they’ll regret giving me the money when they find out I can’t deliver.

But I’ve thought about it, and I’ve actually had such feelings in other areas of my life.  The earliest example I can think of is the 11+ - which I passed, catapulting me from being a big fish in **a small pond** to a** small fish in a big pond.  Suddenly, I was **average or below and hardly ever got praised for my work, and for seven years I thought that my passing the 11+ was a fluke, or that my intelligence peaked when I was 11 and it was all downhill from there.

I also feel like I’m only imitating an adult.  My feelings about adulthood have already been better explained by this amazing famous blog post.  Every now and again, I feel like a proper adult, but then those feelings fade, and I think the fact I tend to congratulate myself when I do/say something mature or manage to run the household in my parents’ absence without it burning down or being burgled or something terrible happening to the cat demonstrates that I’m not really an adult.  It’s also part of the reason that at 25 I’ve never had a driving lesson - I refuse to believe that anyone considers me mature enough to be allowed to drive a car.  Silly, when you see some of the idiots on the roads - but that’s another thing that puts me off.  Driving seems like a good way to get killed!  As well as being ideologically opposed to marriage, I also feel like I’m not really mature enough - children can’t get married.  And don’t get me started on the topic of having children. 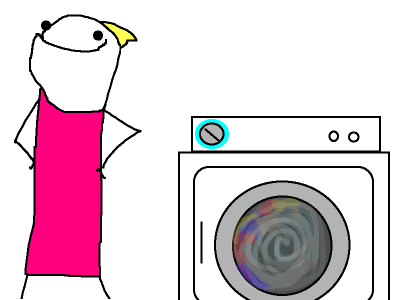 ^^ A picture from Hyperbole and a Half that sums up how I feel when I fulfil many househod chores.

Going back to academic life, my first supervisory board was one of the things that got postponed by the strikes, and now it’s not until February 27th.  My supervisor and I had both wanted it earlier than that, but for different reasons - I said to him that I just wanted it out of the way and he reminded me that it’s supportive and not a trial.  I think there’s a big difference between how students and lecturers see boards - for students, there’s a chance they might hate everything you’ve done and realise that you shouldn’t be **doing the course after all.  And even if you get through one board, **they might find you out at the next one.

The speaker on Wednesday defined imposter feeling as “the feeling of having misrepresented yourself despite objective evidence to the contrary”.  I have all sorts of qualification certificates, good references and a house that is still standing, but my brain discounts all that and makes excuses like “it was easy, they do say A Levels are getting easier” **or “I only just got a** First”.  Things is, unless you’re a narcissist, there’s no such thing as feeling clever - to you, you’re just doing your job and getting on with things at an average rate.  With me, chronic low self-esteem also comes into it.  Topically, I’ve read in books about only children that we find it difficult to become adults - see last week’s blog about being on the threshold, for example. But the good news is it’s normal to have imposter feelings from time to time (most of the time it’s at the back of my mind and I do expect to get through this PhD, or at least have a good crack at it) and it’s better than being a narcissist.

So, what else did I do this week?  Well, I helped set up the website/blog and Facebook and Twitter pages for the Colchester Women’s Oral History Project.  I’m pushing this again because we need interviewees (aged around 60 and over and having lived in Colchester for a significant amount of time) and transcribers (accurate ones).

In my spare time, I’m currently reading Flappers by Judith Mackrell.  Once again, something I’m reading for fun has ended up relating to my work - one of the women Mackrell writes about, Nancy Cunard, was an only child and had problems as a result - not least because her upper-class parents were so distant, making her especially lonely in childhood.  Can’t wait to read the next section about her.  It’s also topical because I’m going to the University History Society’s Speakeasy Party tonight, dressed as a flapper of course.