On Tuesday 14th October I went to Mary Clare Martin’s talk on her upcoming work on the role of illness in modern British childhood.  I won’t go into huge detail about everything she said because I don’t want to gie massive spoilers for her future books, but there were a few things that particularly stood out to me.

One big thing was that Martin is using autobiographies in her work, as I am.  In fact, we’re actually using the some of the same autobiographies for totally different things; she mentioned Harold Hobson, who is in my reading pile, and I now know to expect some grim stuff about polio in it.  When she mentioned that she was looking into tonsillitis my ears pricked up because I’ve come across a couple of instances of it shaping people’s formative years in my own work - namely parents refusing to let them have the operation and botched kitchen-table operations.  But best of all, the fact that a senior academic is using these sources makes me feel more justified in using them myself.  So many people dismiss autobiographies because of all the problems with them, and Martin recognises these problems, but like me she’s _using them anyway.  _This is a confidence boost.

There was some general overlap in our content too.  One point that came up in the discussion was the special treatment of sick children by their parents, which took my thoughts back to Adler, and how sick and only children are supposedly especially prone to inferiority complexes because they’ve been told they’re different and can’t do things other people can do.  There were generally similar warnings in my perod about sick and only children being too indulged and becoming little tyrants over the family as a result.

Martin also brought up the idea that children’s illnesses shaped their siblings’ formative years, from reading accounts by siblings of ill children.  Obviously I haven’t come across it as much, but a few of my people have had siblings who died in infancy (young enough for me to deem them ‘only children’) and talked about how their siblings’ poor health made their parents more worried about theirs.  I think a further link from that which is beyond both our remits would be how parents’ illnesses shaped children’s lives; quite a few of my subjects had ill parents (in some cases probably the reason why they didn’t have siblings) and report the impression this made on them.

Martin also brought up the idea of hospital as a potentially fun place for children to be.  I’d always thought of them as grim places of separation and isolation, but depending on their illness and age, a child might get to interact and have fun with a bunch of other children, an experience they might not get at home - much in the same way that while some only children hated the sociability of boarding school, others loved it because they got to be around children their own age.  And that brings us back to the whole thing about there not being one definitive ‘only-child’ (or, indeed, ‘sick child’) experience.  This talk was really interesting and I’m looking forward to Martin’s publications on the subject! 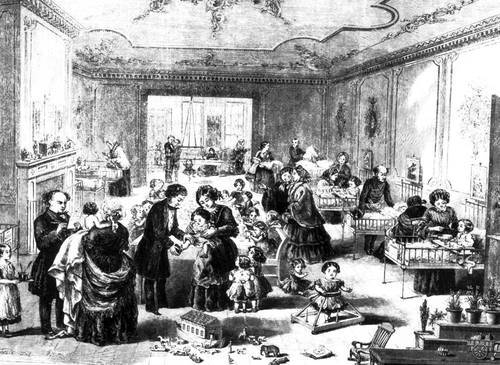