I am not good at the summer ‘break’.  I have plenty of work to keep me occupied, but everything is so dull, campus is absolutely dead and there are no events to go to.  It’s only since I’ve been at university that I’ve hated this time of year.  Unlike university, the re-starting of school was nothing to look forward to whatsoever, and as a child I had a higher tolerance of daytime TV (only four-and-a-bit channels as well!), no termtime social life to compare with the dead time of summer (this has everything to do with being a misfit introvert and nothing to do with being an only child, by the way), and the internet could keep me entertained for a lot longer when I couldn’t use it until my mum finished working on the computer.  So, to ward off boredom-induced insanity, I’ve been trying to do interesting/new things as an act of self-care.

Remember how I revived my interest in my PhD a few months ago by giving myself a reading week?  I’ve done that again this week, and might extend it into a reading fortnight.  There are a few benefits of this.  One is that it means I’m doing something other than writing - alas, I have no more primary research to do, so no fun weekly visits to the British Library like last summer.  It would be very easy for me to just write for the whole summer, but by the end I probably wouldn’t want to write ever again, and I’m already producing chapters faster than my supervisor can find time to read and critique them as it is.  It’s also allowed me to tackle my long list of things to read, which is always good.  And it’s generally interesting.  This week I’ve been focussing on siblings, with two very different books by Dorothy Rowe and Judy Dunn.  I found Rowe’s book absolutely fascinating and the type of book I’d love to write myself, and I’m planning to read more by both authors.  Next week I hope to familiarise myself with J. A. Banks and read some Raphael Samuel as well.

On Wednesday I took a day off from my studies and went to London with my partner.  As well as successfully introducing him to a restaurant I thought he’d like, we went to the Natural History Museum and Oxford Street.  Neither of us had been to the NHM before, and we found ourselves looking at the artefacts rather than reading the information because it was so crowded - I’m glad I finally went, but I definitely prefer smaller museums for being able to spend time properly looking at and thinking about things.  At the Foundling Museum, for example, I was not only able to read everything about the displays, but sat and listened to all the excerpts from an oral history interview that was part of a display.  At the NHM there’s always a feeling that you need to move along quickly because you’re in someone’s way.  It’s kind of hot in there, too.  Our main destination on Oxford Street was the massive Lush that’s opened there - I bought lots of bath bombs for future self-care.  They could also be considered an investment in my work as I have some of my best ideas in the bath!

A new thing I’ve done in the past couple of weeks is cardio tennis.  Tennis was the only sport I was moderately good at at school (not that the teachers noticed as I was already stereotyped as being bad at all sports, grumble grumble) and something I’ve always wanted to take up since, but the awkwardness of having to find a tolerant partner always put me off.  Cardio tennis negates that because there’s basically a group of you hitting balls thrown at you by the instructor in different activities, and it’s not the end of the world if you’re not that good (I’ve been to two sessions so far, though, and I definitely managed to hit the ball more times this week!).  I’m really enjoying it, and it’s good to have something on my schedule that gets me out of the house other than my usual gym.

I’ve also made plans for a couple of weeks in August (a visit to a friend in Oxford at the beginning, and a summer school at the end) so maybe summer won’t be so bad after all. 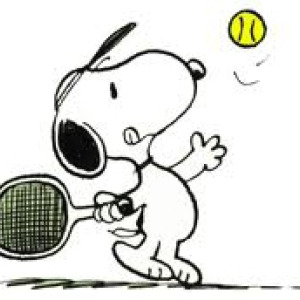