Ah, Foucault.  That really talented and prolific French guy who gets referenced by practically everyone in the humanities.  Seeing as he had things to say about human nature and the self in terms of ‘the subject’, I thought I’d better read some things by/about him.  I’ve found some things so far that could relate to my thesis, but I don’t know if they’re too forced/tenuous.

As I mentioned, Foucault wrote a lot, so I thought I’d better start with a short guide to his work - Gary Gutting’s Foucault: A Very Short Introduction (Oxford, 2005).  The first thing that really got my attention was Foucault’s idea that ‘at any given period in a given domain, there are substantial constraints on how people are able to think’ **(Gutting, p. 32).  This could link to possibilities in life over the course of my period, particularly for only children of different genders and social groups.  I was less enthused that Foucault wasn’t into individuals’ thoughts so much as the underlying structures that made the individuals possible (what he calls **archaeology) (Gutting, p. 32), and that ‘subject-centred’ accounts of history were prone to distortion and put too much onus on the conscious person as an agent of change, but it’s certainly something to think about - to what extent were only children in charge of their own destinies?

Besides, it’s not like Foucault ignored minorities and the oppressed and focussed solely on the bigger picture - I like the idea of people always being stuck in norms (his example was having to be overly-coy or overly-adventurous about sex depending upon what was being advocated at the time, but it could apply to only children getting stuck within expectations), and that marginalised groups were particularly restricted by norms (I’m thinking children in general) (Gutting, pp. 98, 102, 104).

Related to this, Foucault wanted to dig out ‘subjugated knowledges’ from the past, for example, knowledges that have been disqualified due to being seen as non-conceptual, insufficiently elaborated, naive, inferior, unerudite or unscientific, as opposed to more ‘rigorous’ forms of knowledge such as medical knowledge (Mauro Bertani and Alessandro Fontana (eds), Michel Foucault: “Society Must Be Defended” Lectures at the College De France, 1975-6, (New York, 1997, translation David Macey, 2003).  If I’ve understood correctly, that’s what I’m hoping to do, albeit more individually than he might have approved of - pitting the actual experiences of only children against dominant discourse of the time.  Discourse is another thing Foucault got his teeth into, pointing out that multiple, opposing discourses can merrily exist on the same subject:

‘We must make allowance for the complex and unstable process whereby discourse can be both an instrument and an effect of power, but also a hindrance, a stumbling-block, a point of resistance and a starting point for an opposing strategy.’ Michael Foucault, _The History of Sexuality Volume I: An Introduction_, (London, 1978), p. 101. > >

Research findings that being an only child weren’t that bad, _pour example?  _Not to mention discourses favouring the small family when everyone was like ‘oh no, the population!!’

That leads on to Foucault’s ideas about ‘biopolitics’, i.e. the use of measurements, forecasts, and interventions to persuade the population to be healthy and have numerous, healthy children (Bertani and Fontana (eds.), pp. 243-6).  This pops up in The History of Sexuality in that, Foucault argues, while everyone in the eighteenth and nineteenth centuries seemed to be reticent about sex, different agencies with a variety of concerns were very much centred around it - including ‘economic interventions (through incitements to or curbs on procreation)’ (Foucault, pp. 145, 146).  I’ve certainly come across that in incitements not to have only children for fear of population decline and individuals who wouldn’t ‘fit in’ to society - in fact, I’m pretty sure that was the purpose of all the writing that criticised only children!

I also possibly want to take on board Foucault’s point (again, if not too tenuous) that power does not necessarily come from an over-ruling group, but power relations are actually everywhere, as well as small resistances, and rather than being restricted ‘from above’, groups place restrictions (in the case at hand, regarding sexuality) upon themselves to uphold a certain identity (Foucault, pp. 93, 122).  In the middle classes, this might also manifest itself in criticism of only children (as seen in my Mass Observation research), and restrictions on what children could do or be.

Just to briefly mention a couple of other things that could possibly be relevant to my thesis, Gutting, summing up another idea of Foucault’s, wrote that:

‘There is no simple correspondence between a general structure of thought and specific beliefs and actions.  When my psychoanalyst tells me that I unconsciously hate women, she is not refuted by my truthful claim that I call my mother every week and never forget my wedding anniversary.  It may still be true that I have a deep animus toward women that comes out in certain paradigm cases of my behaviour.’ Gutting, p. 40. > >

Could some only children, who normally refute the stereotype, act like it in certain extreme circumstances?  And can we ever know, when autobiographies and oral histories represent ‘typical’ actions, adaptations and feelings and overlook things that didn’t fit?

Finally, I liked Foucault’s description of a man who didn’t fit well into society (possibly inciting his partner to kill her daughter) - although in this case, this character who was illegitimate, had a disturbed mum and lacked pride failed to rise above his circumstances and seemed to have an inferiority complex, Foucault noted that his innate ‘insipid’ personality prevented him from overcoming his background (Valerio Marchetti and Antonella Salomoni (eds.), Michel Foucault, Abnormal: Lectures at the College de France, 1974-1975, (London, 2003, translated by Graham Burchell, p. 2).  This fits well with my overall thesis that only children could have a good or bad time of it for a variety of reasons, including their inborn personalities which determined how they coped with what life gave them. 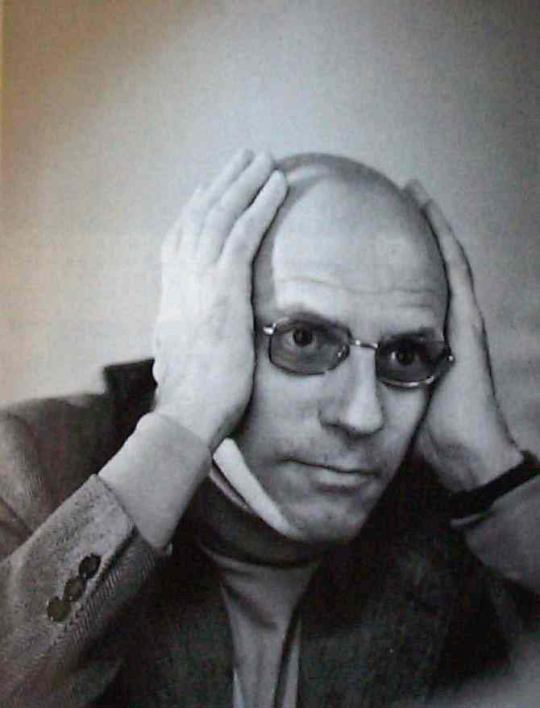 Foucault demonstrating my expression after reading some of his more dense passages.