So. this week I started reading some child guidance manuals, in order to find out opinions on only children as well as why some of the characteristics attributed to them were so bad.  So far I’ve made a little headway, but today I’m going to blog about something else that caught my attention but isn’t so much to do with my thesis but might be something I want to follow up in the future.  It concerns acceptable and unacceptable ways to scare children.

The three books I read this week were Jacob Abbott: Gentle Measures in the Management and Training of the Young (New York, 1872), John S. C. Abbott: The Mother At Home; or, the Principles of Maternal Duty, Familiarly Illustrated (New York, 1852 edition)), and John S. C. Abbott: The Child At Home: The Principles of Filial Duty, Familiarly Illustrated (New York, 1833)).  I’ll confess, I picked these books because they were the first ones alphabetically in a bibliography - but as that bibliography was quite long, I think I’m going to have to pick things systematically/because their titles look relevant in the future.

The Abbotts were brothers and ministers from Maine who were concerned with education.  As the titles suggest, Jacob at least appears to have been the more liberal of the two - he set up a girls’ high school and believed children’s wishes should be indulged so long as they weren’t harmful or dangerous.  I’m guessing he thought material indulgence came under the ‘harmful and dangerous’ heading.  In some ways, his methods were quite modern - he advocated the use of the naughty step, for one thing, and recognised that children’s imaginations are so fertile that they sometimes get confused between events that did and did not happen, for another.  John, on the other hand, took a harder line, particularly in light of the fact that The Child At Home (meant to complement The Mother At Home - the disparity in dates above is because I read different editions) was aimed at children.  If I was a child I would have found it terrifying rather than encouraging!  Both authors were keen on authority and obedience, and instructed parents to take a hard line with their children - no reasoning, no wheedling persuasion.

> > "shock the whole nervous system, sometimes with the excitement of pain and terror, and always, probably, with that of resentment and anger. In some cases this excitement is extreme. The excessively delicate organization of the brain, through which such agitations reach the sensorium, and which, in children of an early age, is in its most tender and sensitive state of development, is subjected to a most intense and violent agitation."  > >

Such agitation could, Jacob continued, lead to later organ problems or ‘derangements’.  Similarly, **harsh reproofs and threats **were said to cause distress, alarm and anxiety, and damage the nervous system.

Jacob also warned parents not to scare their children.  Whether these threats were real entities (black men and policemen) or supernatural (phantoms, hobgoblins), they could lead to temporary or permanent insanity.  He laid the blame for such practices at the door of European domestics in particular.

John issued a similar warning in The Mother At Home.  He gave a couple of examples:

> > "An English writer gives a most appalling account of two instances in which fatal conse- quences attended the strong excitement of fear. Says he, "I knew in Philadelphia, as fine, and as sprightly, and as intelligent a child as ever was born, made an idiot for life, by being, when about three years old, shut into a dark closet by a maid-servant, in order to terrify it into silence. The thoughtless creature first menaced it with FAULTS AND ERRORS sending it to 'the bad place' and at last to reduce it to silence, put it into the closet, shut the door, and went out of the room. She went back in a few minutes, and found the child in a fit. It recovered from that, but was for life an idiot. When the parents, who had been out two days and two nights on a visit of pleasure, came home, they were told that the child had had a fit, but they were not told the cause. The girl, however, who was a neighbor's daughter, being on her death-bed about ten years afterward, could not die in peace without sending for the mother of the child and asking forgiveness of her. Thousands upon thousands of human beings have been deprived of their senses by these and similar means." > > > > "It is not long since that we read, in the newspapers, of a child being absolutely killed — the case occurred at Birmingham, I think, — by being thus frightened. The parents had gone out into what is called an evening party. The servants, naturally enough, had their party at home; and the mistress, who, by some unexpected accident, had been brought home at an early hour, finding the parlor full of company, ran up stairs to find her child, which was about two or three years old. She found it with its eyes open, but fixed; touching it, she found it inanimate. The doctor was sent for in vain: it was dead. The maid affected to know nothing of the cause; but some one of the parties assembled discovered, pinned up to the curtains of the bed, a horrid figure, made up partly of a frightful mask! This, as the wretched girl confessed, had been done to keep the child quiet while she was with her company below. When one reflects on the anguish that the poor little thing must have endured before the life was quite frightened out of it, one can find no terms sufficiently strong to express the abhorrence due to the perpetrator of this crime, which was, in fact, a cruel murder; and, if it was beyond the reach of the law, it was so, because, as in the case of parricide, the law in making no provision for wickedness so unnatural, has, out of respect to human nature, supposed such crimes to be impossible." > >

The exception to the rule of ‘don’t scare children to get them to behave’ is, perhaps unsurprisingly, God.

Jacob at least tried to damp down the threat of God.  He instructed parents not to portray God as vengeful and terrifying, and not to tell their children they were sinners or on the ‘wrong side’.  His brother was less soft on the subject.

At this time, child mortality was still high, and naturally both authors posited such an eventuality.  Jacob claimed that parents’ grief on the death of a child would be tempered if they had positive memories of good behaviour.  John builds upon this - not only will the parents be left with good memories, but the child will go to heaven.  The consequences of poor parenting, however, are to be expected.  In The Mother At Home, we see several examples of wayward children dying with no hope of being reunited with their parents in heaven.  And if that’s not bad enough, your children will blame you for their ignomious end.  And it’s not enough to bring your children up as good Christians if you’re not one - they might go to heaven, but you won’t be there!

And that’s the book that’s more aimed at parents.  I think The Child At Home is scarier, given its target audience.  Children themselves are reminded that they could die at any time.  Examples include a girl nearly getting shot in the face and a girl who was good most of the time but nonetheless died aggrieved over the things she did do to upset her parents.  There are also some gruesome explanations for parents not letting children play out in the evening.  However, I particularly liked this quote:

> > "And how do you suppose the liar must feel when he comes to die? It is a solemn hour. Perhaps many of the children who read this book have never seen a person die. I have seen many. I have seen children of all ages dressed in the shroud and placed in the coffin. I might write pages in describing to you such scenes … but how must a child feel in such an hour, when reflecting upon falsehoods which are recorded in God's book of remembrance! Death is terrible to the impenitent sinner; but it is a messenger of love and of mercy to those who are prepared to die. If you have been guilty of a falsehood, you cannot, die in peace till you have repented and obtained forgiveness … if any child who reads this book is tempted to deceive his parents or his friends, I hope he will remember that he must soon die, and think how he will feel in that solemn hour." > >

> > "But we must not forget that there is a day of most solemn judgment near at hand. When you die, your body will be wrapped in the shroud, and placed in the coffin, and buried in the grave; and there it will remain and moulder to the dust, while the snows of unnumbered winters, and the tempests of unnumbered summers, shall rest upon the cold earth which covers you. But your spirit will not be there. Far away, beyond the cloudless skies, and blazing suns, and twinkling stars, it will have gone to judgment. How awful must be the scene which will open before you, as you enter the eternal world!’ … ‘If any child who reads this feels condemned for past deception, oh, beware, and do not postpone repentance till the day of judgment shall arrive." > >

And in case any child reading isn’t yet scared into submission, there’s also a child-unfriendly description of the crucifixon:

> > "…he was persecuted, and insulted, and abused. Again and again he was compelled to flee for his life. They took up stones to stone him. They hired false witnesses to accuse him. At last they took him by night, as he was in a garden praying. A cruel multitude came and took him by force, and carried him into a large hall. They then surrounded our blessed Savior, and heaped upon him all manner of insult and abuse. They mocked him. They collected some thorns, and made a crown, which they forced upon his head, pressing the sharp thorns into his flesh, till the blood flowed down upon his hair and his cheeks. And after thus passing the whole night, he was led out to the hill of Calvary, tottering beneath the heavy burden of the cross, which he was compelled to bear upon his own shoulders, and to which he was to be nailed. When they arrived at the place of crucifixion, they drove the nails through his hands and his feet. The cross was then fixed in the ground, and the Savior, thus cruelly suspended, was exposed to the loud and contemptuous shouts of an insulting mob. The morning air was filled with their loud execrations. A soldier came and thrust a spear deep into his side. To quench his burning thirst, they gave him vinegar, mixed with gall. Thus did our Savior die". > >

Now, of course, to these writers the wrath of God was a real and tangible threat - unlike the aforementioned phantoms and hobgoblins.  Nonetheless, I can’t help but feel that any child who read John’s book would have been just as likely to suffer from problems of the organs and nerves than one threatened with things that go bump in the night.  It’s surprisingly heavy stuff! 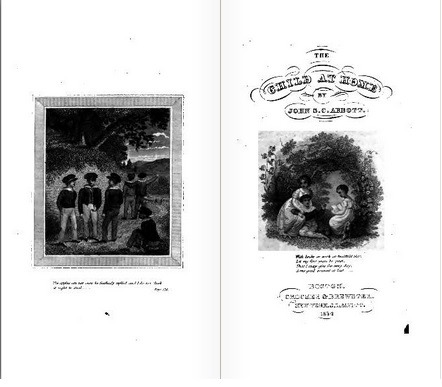 Image from The Library of Congress.