A few months ago, I had one of those dreaded conversations with a taxi driver about what I research, which segued into the research interests of my fellow PhD students.  To paraphrase:

‘There are a couple of people doing Chinese history,’ I volunteered.
‘I don’t fancy that much,’ he replied.  ‘Genghis Khan, maybe.’
‘There’s more to it than that.  More modern stuff, like the Cultural Revolution,’ I countered.

Admittedly, I didn’t know much about the ‘more to it’ than what I’d heard from my colleagues, though it was interesting to me.  Buy Me The Sky, Xinran’s new book about only children in China, not only taught me about the recent generations of Chinese people, but is rich in context about Chinese history, culture, and values.  One thing I liked about this book was that I came away feeling a lot more knowledgeable about the country than I had been before, and I actively want to read her other books to find out more.

For all it claimed to be about ‘only children’, though, I felt this book was more about ‘China’s childen’ rather than ‘China’s only children’.  There were a couple of things I could definitely get on board with: the lack of company (especially multiplied in China where there were no aunts, uncles or cousins) and the feeling of being the focus of all your parents’ attention and the receptacle for all their expectations.  I think those might be fairly universal only-child experiences.

But there were other things that affected these only children’s lives that I think were more to do with the society they lived in than their being ‘only’ - they might have had similar experiences if they had siblings.  I’ll name a few examples from Xinran’s book.  One of these is that the parents of the earliest generation of Chinese onlies had different experiences and child-rearing ideas to western parents: they had experienced extreme poverty, and now there was abundance, they didn’t want their children to want for anything - a contrast to western parents who deny their children things to show them that ‘I want doesn’t always get’.  Keeping ‘face’ is also important to the Chinese, meaning there is a lot of pressure on their only children to get things right the first time, not to make mistakes, and represent their parents in public.  Education is another thing that can make life difficult for Chinese onlies and would presumably affect them if they had siblings too; accoridng to Xinran, it focuses on book-learning at the expense of morals, values and life skills.  Quietness in the home is another China-specific difficulty; the only children there are inhibited from expressing their thoughts and feelings, but we can’t know whether siblings would alleviate this.

All of the only children Xinran interviewed for the book were asked their opinions on the case of Yao Jiaxin, an only child in his 20s who stabbed a migrant mother he had run over.  I found myself agreeing with the ones who said it was more to do with the effects of society and his upbringing than his being an only child; after all, most Chinese only children don’t go around doing that, and of course a high proportion of young Chinese criminals are going to be only children if virtually everyone of that demographic is one!

It was good that Xinran highlighted the variations between the various rich only children she interviewed - from the ones who couldn’t do anything for themselves, to the determined and independent-of-mind.  It was also good that she made the point that rich and poor only children have very different lives, though I would have liked to have seen more made of this; there were several chapters devoted to only children from wealthy families, while the poorer only children were crammed together into a chapter where they were described as ‘teachers’ to Xinran, and this made the book feel a little imbalanced.  It was clear that the poorer only children had very different problems to the richer only children, and that spoiltness, feelings of superiority and inability to do things for themselves were not among these.  Although I did learn shocking things about extreme poverty and infantifide, a more balanced examination would have given only children a better press overall.

I found Xinran to be a sympathetic narrator and I liked her narrative ‘voice’, though I did experience some culture clash - as a Chinese mother she was extremely shocked that a Chinese girl, who had moved to New Zealand and found herself totally unprepared for independent life, hated her parents and wasn’t in contact with them, whereas as a western millennial, I was less taken aback by this.  While Chinese children are meant to revere and be grateful to their parents, we seem to be encouraged to resent them and blame them for our faults (possibly something to do with Freud!).  Saying that, I don’t think it would have harmed anyone for the girl to ring her parents now and again…

Overall, I learnt a lot from Buy Me The Sky, though possibly more about Chinese child-rearing practices and ideals than only children themselves.  As the result of an unprecedented policy, these people all happened to be only children in a highly unusual situation - China was, and still is, developing at an extremely fast rate, and the people living there have to deal with that.  We can’t know whether its children have turned out in certain ways due to their only-ness or because of a mixture of upbringing and society.  In my view, the most important thing one can take away from this book is variation - every family circumstance is different, every only child is different - but I would say that as that’s the crux of my own argument! 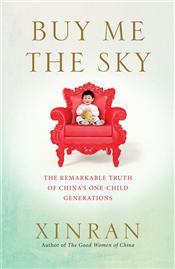