I must admit, in the past I have been a little taken in by the ‘Bletchley myth’ - that during WWII, Bletchley Park was full of geniuses doing really exciting work, something I’d have liked to have been a part of had I been around then.  Tessa Dunlop’s Bletchley Girls effectively dispels those myths, and that’s one of the things I like about it.  The book is based on interviews with 15 women whose work was either at or linked to the Park, and Dunlop makes it clear that these women were either average or above-average (as opposed to geniuses) in intelligence, and that many of the jobs were mind-numbingly tedious, and it was not made particularly obvious to them how significant their work actually was.

What I also liked about this book was that it didn’t just talk about the six years of the war, but the women’s lives as a whole.  By having this context, it is again made clear to the reader that they weren’t all hugely intelligent - only one came from university, another came straight to the Park after leaving school at 14 - though there was a definite middle/upper class bias, thus providing a bit of class history.  In fact, Dunlop brings in all sorts of histories, such as gender, fertility, entertainment and housing, to paint a vivid, contextualised picture of the world these women inhabited, and show us that Bletchley wasn’t just about work.  By telling us what happened in these women’s lives after the war, Dunlop further emphasises just how ordinary these women were - by far the majority got married, became housewives, and had children, as was expected of them, rather than being ‘bluestockings’.

Dunlop takes a thematic approach, which I think works very well, as it allows her to wrap the historical context around the women’s stories in a way that might have seemed interrupting and repetitive had she given a chapter to each woman.  A problem with this approach, though, was that sometimes I forgot who was who - Dunlop often helpfully reminds us who someone was by repeating an identifying detail about them, but I still got a little confused when I picked the book back up having left it for a day or so.

Being a popular history book, it was very easy to read and get into.  I liked that Dunlop described how she found and selected these women, though the academic in me would have liked to have seen a bit more about the limitations of interviewing people - the fallibility of memory (aside from a mention of a woman she didn’t interview because her memory was too lost) and the notion that they might still be loyally keeping some secrets after all these years, for example.  It is a pain to have to include things like that, but I miss them when they aren’t there - oh, to be on the more journalistic side and not to have to talk at length about my sources!  There were a few ‘journalistic’ turns that annoyed me a little, such as the linking-back from the women’s current looks and expressions to what they did in the past, but that might just be personal preference.

So, if I was at Bletchley Park, which of these women’s jobs would I want?  Well, I’m no good at languages, so translation work is out.  Although I did a seven-year sentence in retail, my current frustration at coding data and listening to oral histories for my control group suggests that I wouldn’t enjoy the tedium of punching cards all day.  But one of the women had a job that involved paraphrasing messages, and I think that’s the job that most appeals to my humanities-and-essay-writing-oriented mind. 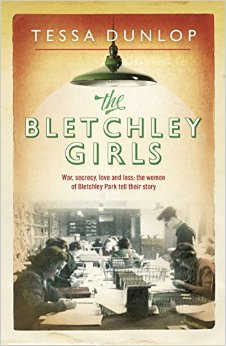