I spent Thursday and Friday of this past week in Leeds (hence the late blog post - it was a long journey back!) at the ‘Birth: Personal stories to population policies’ conference.  The full programme can be found here, and I also livetweeted most of the papers (alas, train trouble meant I missed the first session on the Friday) on the #histbirth hashtag.  I’m not going to talk about every single paper as it would make for an insanely long blog post and you could just read my tweets, but I am going to blog here about my particular favourites.  It was hard to choose as they were naturally all excellent and accomplished!

Chris Renwick’s talk on Voluntary and Involuntary Parenthood grabbed me because there was some overlap with my own research.  I’ve done some work on eugenics and fertility surveys and his paper helped clarify those for me - when you read books you get bogged down in details and it’s nice to hear the things you actually need.  Renwick’s paper concerned the personal and the political - the personal choice of how many children to have, and the question of how far it’s possible for a government to persuade certain people to have more children.  He focussed on explanations and policies suggested by contemporary researchers for the perceived population crisis of the 1920s and 1930s, which fitted nicely with my questions about why people had only children and what contemporary opinion was about this.  We also had a little chat afterwards and now I have some reading to follow up!

Another paper I was especially drawn to on the first day was co-organiser Laura King’s, on the impact of birth on men from 1950 to the present day.  It was extremely interesting: King interviewed more than 40 men about their experiences of birth, and uncovered a variety of experiences I’d never even thought about - when men develop a bond with their children and how this varied depending on how they felt at the birth or if they were even there at all.  As a family history and oral history enthusiast, this was a natural favourite for me.

On the second day I really enjoyed hearing Leah Astbury talk about post-childbirth medical practices in the seventeenth century.  Having previously been an early modernist, I thought I pretty much knew about what happened before, during, and after a seventeenth-century birth, but I only really knew about a couple of sides of it - the religious- and gender-related sides.  I had no idea about the meanings attached to post-partum bleeding: that bleeding was regarded as necessary to an extent, as it expelled missed periods and the foetus’s blood, but if it went on for too long (i.e. more than a month(!)), the woman was regarded as being in a dangerous state of health.  I wasn’t hugely aware of the role of baths and poultices in returning the woman’s body to its pre-pregnancy state either.  Even though I no longer actively study the early modern period, I retain an interest in it and love to hear about it.

Also on the second day, we received a paper with a difference - retired midwife of 43 years Linda Fairley imparted her experiences of being a midwife, and how things changed over time.  I’ve written before of how medical practices changed so often in the twentieth century that it’s important to record the experiences of people who worked in the health sector during this period so that knowledge of former practices can be preserved, so I think it’s great that Fairley has written two books about her experiences and speaks to audiences about her career.  I was particularly surprised that until as late as 1993, women had very little control over how their births were handled - for example, having to have enemas, not having the choice of a water birth, just having to do what doctors at the time decided was the right way to have a baby.  It makes it seem even worse that when I received sex education in the early 2000s, the birth video we watched was from the 1980s.  I think that video might count as one of the historical objects Kate Fisher (the keynote on the second day) used as part of a project to engage and educate young people!

There was also a ‘round table’ session, chaired by Shane Doyle, which I really enjoyed.  I didn’t really know what a round table was, or what to expect, but I found it a really good opportunity for everyone to speak - I hadn’t been able to think of any questions to ask in the papers, so it was good that I had that platform, even if I did end up talking about a woman I’d read about in the papers who’d had to stop breastfeeding because it gave her orgasms which made her tired!  Subjects covered varied from birth stories (including pressure for them to be positive - though I’ve come across a fair number of women and only children who were negative about births they had/came from, change in the way a birth story is told over time, and forgetting the worst aspects of the birth through biology), sexual pleasure in birth and breastfeeding (hence my comment!), birth as public property (sharing tales of pain or otherwise, the presence of women in the early modern birth room), and same-sex birth (potentially very different experiences depending on whether the baby was born of one of the partners in the case of lesbians, or a surrogate, and which partner had the baby).  Doyle also suggested judgement of the childless as a conversation topic but alas we ran out of time before I could say what I wanted to about people also getting judged for having too many or too few children.

Outside of the sessions, there was a handling session of birthing objects from the Thackray Medical Museum in one of the breaks, which was very interesting although also quite gruesome!  Of course, I talked to other historians and midwives in the breaks and at lunch and dinner time.  I was very impressed by the food provided by the University of Leeds, and on the first night we had a delicious meal at Thai Edge, in the city centre.  I didn’t get to see very much of Leeds, but from what I saw there are some lovely buildings there and it would be nice to explore it one day when I’m not weighed down by an overnight bag!

This was the first time I’d livetweeted a conference and I don’t think I did too badly (once I started including the speaker’s name in each tweet!).  It made me less likely to take notes on paper as I couldn’t do both at the same time, but then again by livetweeting I gave myself an electronic record of the main points of the papers anyway.  I can’t tell if anyone out there benefitted from it as I didn’t get much interest in the way of replies and retweets, though obviously that doesn’t mean people weren’t reading them.  Maybe livetweeting is more dynamically interactive at bigger conferences where it’s not as easy to talk to the other delegates face-to-face about the papers, or with parallel sessions where people might have a clash in the papers they want to go to? 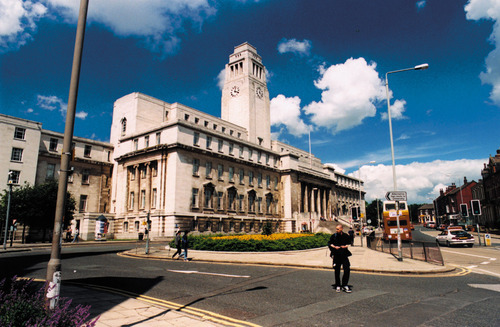