Every now and again, you come across an autobiographer or oral history interviewee you find objectionable to some extent or another.  You’re happily reading or listening along and then BANG, they advocate a bizarre one-child policy in Britain, criticise the Church of England for having the gall to take the views of minorities into account (with the conjunctive use of the terms ‘gay marriage’ and ‘unnatural lives’), or say that women shouldn’t go out to work (all actual examples).  You have to keep going, because you haven’t quite finished compiling their only-child experiences, but you’re less inclined to be sympathetic with them.  You also have to keep an eye out for any unintentional bias you might use against them when you’re analysing and writing up.

On the whole, objectionable autobiographers are easier for me to deal with than objectionable interviewees.  They often come from an earlier time and are dead, so you can cut them a bit of slack.  The same goes with Mass Observation inteviewees who were particularly mean about only children or bring eugenics in - besides being long-dead, the nature of the surveys means you don’t get so involved with them as people.  It’s more difficult with oral history interviewees, where they’re quite possibly still alive, and the recording makes them ‘seem’ more alive than autobiographers in any case.  The questions they’re asked can bring out some opinions that I don’t have any sympathy with.  This is especially true of the Millennium Memory Bank interviews, where questions about co-habiting, having children out of wedlock, and immigration bring out the kind of anti-progress, anti-generally-judging-people-less-which-is-surely-a-good-thing views you get on lunchtime radio phone-ins - perhaps unsurprisingly, as the BBC appealled for interviewees on local radio.

On the other hand, there have been interviewees and autobiographers I’ve liked more than others, and in fact at some point I’m going to do a post talking about my top ten favourite autobiographies.  Feminist and artist interviewees have been particular favourites, not just because I agreed with what they were saying, but because their lives and experiences were particularly interesting to me.  Some autobiographies are especially readable, some are funny, others I like because the author devoted more than a perfunctory ten pages to their childhood.

Do I need to have sympathy with the people I’m researching?  Probably not - you wouldn’t expect that of someone researching, say, the Third Reich.  When I read people’s experiences of being an only child, I do naturally think ‘I can relate to that’ or ‘nope, I didn’t have that myself’, but that doesn’t mean I’d only write about the people I shared experiences with - besides being very bad history indeed, from the beginning I expected that my thesis would show that there was no single ‘only child’ experience, and it would reflect this diversity.  Hopefully, with the distance of time and the use of Nvivo, with which I can effectively cut up and match together different experiences of the same phenomena and only call on the context when necessary, I’ll forget which people I liked and didn’t like, and therefore avoid unconsciously being unfair to them.  Besides which, most of the interviewees I’ve heard have sounded like decent people, and the ones I didn’t like are a very small minority. 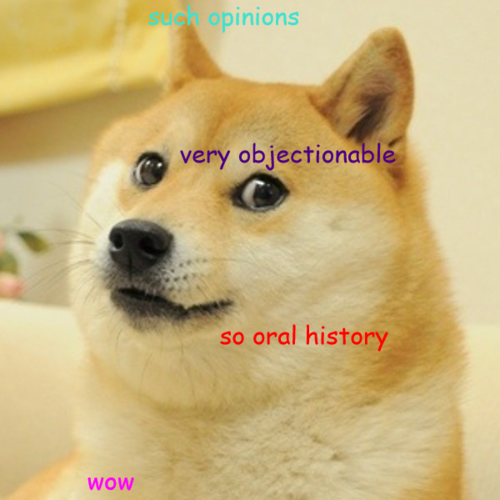